21.4 billion going to the State: Belgian drivers are the most taxed in Europe!

Driving a car costs a lot… an arm and a leg you could say. And the State seems quite hooked on taxing drivers. According to calculations by Febiac, motor vehicles bring in 21.4 billion euros each year. A figure, which, in relation to the number of vehicles, puts Belgium in top spot when it comes to the most taxed drivers.

When we talk about vehicle taxes, you will think about the annual road tax. However, the State coffers have numerous opportunities to be filled thanks to drivers. Notably, there are excise taxes on fuels or even VAT on the purchase of vehicles, fuel, spare parts, etc. According to Febiac’s calculations, the Belgium Automotive and Bike Federation, motorised vehicles bring in 21.4 billion euros to state coffers!

21.4 billion, that’s a lot. And as our colleagues in the “Parisien” revealed, Belgian drivers are the most taxed in Europe. If we take the tax revenue for each country, compiled by the European Automobile Manufacturers Association, and we divide that by the number of cars on the road in each country, you can see that Belgium takes top spot on the podium, with an incredible figure of €3,687 in tax revenue per car in circulation. 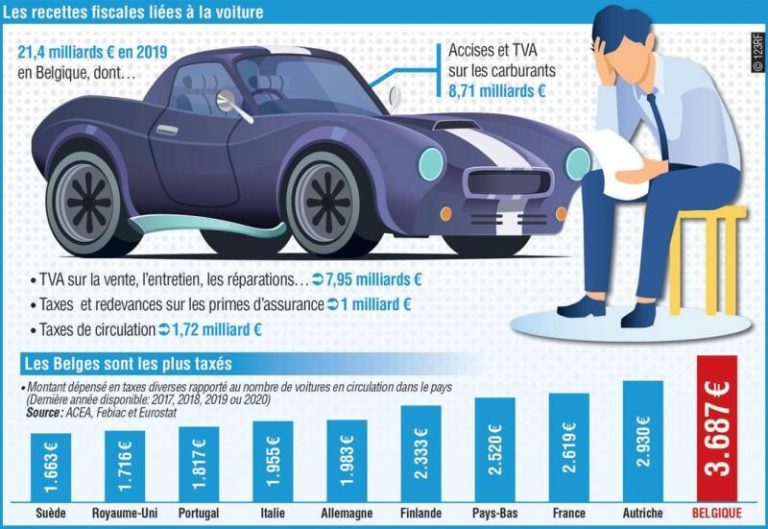 Are drivers seen as an easy target for replenishing the State funds? “If excise taxes are increased by just a few cents, it can have an enormous multiplier effect”, assesses Nadine Antanassoff, from Febiac. “We have been able to see this through certain budgetary controls. When the government decided to increase excise taxes by a few cents, this had a direct effect of bringing in tens of millions of euros. ”

In addition to excise taxes and VAT, there is also road tax that we pay annually, and registration tax that is paid when registering a new vehicle. “In Brussels and Wallonia, these two systems are completely obsolete”, considers Nadine Antanassoff. “These taxes are not currently based on an environmental criterion, but on the engine size or the KW power. And road tax is on a sliding scale according to the age of the vehicle. This means that we are promoting the purchase of older, more polluting vehicles. And we mustn’t forget that in Wallonia, while there is an environmental penalty system that isn’t very discouraging, there is no environmental bonus any more. ”

What is the ideal approach to taxation?

Since 2016, heavy goods vehicles have been subject to a per-kilometre tax according to the number of kilometres driven on certain roads. Wouldn’t a similar system be fairer for cars? “Our position is simple. We need to make taxes greener. And taxing on kilometres driven should be the ultimate objective”, added Nadine Antanassoff. “But it needs to be smart and start counting from the moment we move. To do this, there also needs to be credible alternatives to car travel. From a Walloon perspective, some think that per-kilometre taxation could disadvantage people living in rural areas. But for these drivers, who have no alternative means of transport, we could very well have an intelligent system where they would have almost nothing to pay. ”

Considered obsolete by many observers, the rules which regulate registration and road taxes in Wallonia are set to be modified in the coming years.

Therefore, the regional policy declaration by the Walloon government provides, in black and white, that “these road and registration taxes will be reviewed, with overall taxation unchanged, to adjust them according to CO2 emissions and power-to-weight ratio. The main objective is to promote less powerful and less heavy cars and consequently less polluting vehicles. ”
A reform that is long overdue because it should be integrated more comprehensively into a broader reflection on means of transport.

“The objective, is not to redesign the tax system which applies to cars without thinking about all forms of transportation”, explains the Walloon minister for the budget, Jean-Luc Crucke (MR). “As we need a holistic approach to this reform, we are working closely with the office of the Minister of Transport, Philippe Henry”.